Retired Seat at the Corn Crib

The August 19th MCStrong Night at the Normal Cornbelters game brought in $5516.00 to the Michael Collins Foundation.

Money was raised via single game ticket sales, the 50-50 drawing and a sale of the MCStrong jerseys worn by all the Cornbelters.   All enblazoned with #19.

They retired a seat in Michael’s honor that will never be sold again.  And is located right behind the dugout of his beloved Heartland Hawks.  A plaque in his honor will be hung at a later date at the VIP entrance.   The McLean County Barn Quilt was on display that evening and will hang at the Corn Crib in his memory as well.

And in keeping with Michael’s theme of “Expect to Win” the Cornbelters beat the Schaumburg Boomers 7-4.  After the game  a great fireworks display was shot off all while some of Michael’s favorite songs played, and his picture adorned the centerfield scoreboard.

Thank you to the community and especially to the Normal Cornbelters for the great support!

Please use the link below to spread the word – honoring God and Michael’s memory.

If you prefer to have some cards sent to you, or pick them up, please send an email to Jeff Collins at angels10coach@aol.com.

The Foundation thanks you for the support! 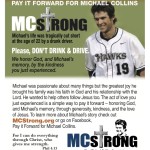 Thank you to Cross Fit Upper Edge for their July 5th fundraiser which raised $712.00 for the Michael Collins Foundation.  Several family members attended the event which honored Michael so nicely.

An MCStrong banner will continue to hang there as they continue to pay tribute to Michael and the life he led.

The Cornbelters will be honoring Michael on Tuesday, August 19th when they take on the Schaumburg Boomers.  Complete details are still being worked out but mark the date on your calendar!   Here is more from WJBC.com and their website:

NORMAL – The Normal CornBelters have announced they are hosting a Michael Collins Tribute Night on August 19.

The CornBelters are playing the Schaumburg Boomers at the Corn Crib at 7 p.m.

Collins was a member of the Heartland Community College baseball team for two seasons and was a current Illinois State University student before he died as a result of injuries he suffered in a car accident on April 2.

“Michael loved baseball, loved playing for Heartland, and loved playing at the Corn Crib. We are proud of the 22 years Michael spent on this earth,” said Jim Collins, Michael’s father. “Some of the very best days of his life were spent playing and practicing with the Heartland Hawks at the Corn Crib, and we are thrilled the CornBelters will pay tribute to him in a stadium that had a special place in his heart – and on the 19th no less.”

The CornBelters have teamed up with Heartland Community College to host a night to remember and celebrate the life of Collins.

“Heartland Community College and the Heartland Athletic Department thanks the Normal CornBelters in advance for creating a special night to honor the memory of Michael Collins but even more so to help carry on his spirit,” said Nate Metzger Director of Heartland Community College Athletics. “The spirit has already provided much widespread love and kindness among our community, and even nationally.”

The CornBelters are going to donate half of the revenue of the tickets sold from the night to the Michael Collins Foundation. In addition, they will create a blue seat behind the Heartland dugout on the 3rd base side of the ballpark and it will have Collins name on a plate on the seat back. The CornBelters will retire the seat after that date forever.

“We are honored the CornBelters are paying tribute to him with a special night and by dedicating ‘the best seat in the house’ to him,” said Collins. “We are so grateful for the CornBelters support of the Michael Collins Foundation, and for them and Heartland baseball working with us to place a memorial plaque in honor of Michael at the Corn Crib.”

The money that is raised that night from the 50/50 will be donated to the Michael Collins Foundation.

“It is appropriate that the date would be August 19th since Michael wore No. 19 and his jersey has since been retired here,” said Metzger. “We look forward to keeping Michael’s spirit alive and certainly the goal of his family & subsequent creation of the Michaels Collins Foundation is to continue to honor his legacy through random acts of kindness and a “pay it forward” attitude just like he exemplified and certainly this night will help do just that!”

The Michael Collins Foundation wants to thank Avanti’s and the B-N community for the tremdendous support with their June 2nd fundraiser.  Avanti’s sent a $872.59 check to the foundation based on the percentage of sales that day.

Thank you to Upper Edge for their support of the Foundation!

The article that follows (below the picture) comes from the Mesa Community College website and outlines his great career.

Congratulations to the Thunderbirds and to Coach Cirelli and his staff.   Michael would be very happy it went to such a tradition rich program and coach and staff – since it did not go to his Hawks and Coach Metzger.

And who could not notice the initials!

To say the least, Tony Cirelli’s 20th season as Mesa head coach was a memorable one.

Not only was it arguably the best in school history with a 52-13 record, but it was punctuated with a national championship as MCC, which entered the NJCAA event as the No. 1-ranked team in the nation. stormed to the title in thrilling fashion.

And, along the way, he won his 700th game improving his mark to 716-456, and was named ACCAC Coach of the Year for the third time.

His right-hand man, Recruiting Coordinator and assistant coach Doug Rose has been on board since 1998.  Sean Kenney, and Tom Novak serve as Cirelli’s additional assistants.

Over the past 29 years, Mesa has been in the playoffs 24 times with four NJCAA World Series appearances. His 2006 squad finished with a record of 44-21 and a #1 national ranking.

Cirelli was named American Baseball Coaches Association Southwest Region Coach of the Year in NJCAA Division II in 2004, 2005 and again in 2006.

In the past 19 years, 45 MCC players have been drafted by Major League Baseball teams or played professionally. Of those 45 players, only five had been drafted prior to coming to Mesa.  Most recently, Brian Broderick made his Major League debut with the Washington Nationals in 2011.

“We take pride in helping a good high school player develop his game so he becomes a draftable player.

Read it by clicking this link!